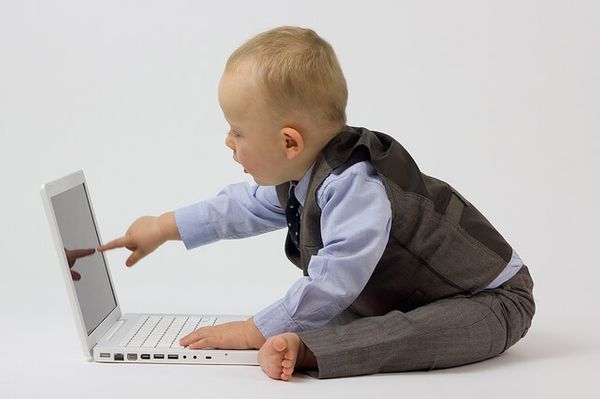 NOTE: This is Part 4 of a five-part series in which I detail how a real-world ASP.NET Web API app using the Command-Query Responsibility Segregation and Event Sourcing (CQRS/ES) patterns and the Redis database might look. Here's Part 1 of this series. The corresponding repository is over on GitHub.

We've done quite a lot of work to get to this point! We've discussed why we might want to use Command-Query Responsibility Segregation (CQRS) and Event Sourcing (ES) in our app, we've built a Write Model to handle the processing of our commands, and we've built a Read Model to query our data.

Now we can show why this is a "real-world" app. Here's what we're going to do in Part 4 of Real World CQRS/ES with ASP.NET:

We're going to switch it up a bit and build the Queries API first, as that turns out to be easier than building the Commands API right off the bat. After all, the Queries API doesn't have to worry about things like validation. So, let's create a new ASP.NET Web API app.

After creating the new ASP.NET Web API project, the first thing we need to do is download the StructureMap.WebApi2 NuGet package and install it. Doing so gives us a folder structure that looks something like this (notice the new DependencyResolution folder): 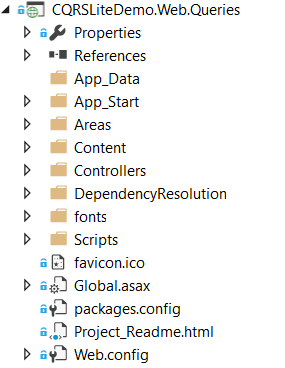 I've blogged about how to use StructureMap with Web API in a previous post, so if you're not familiar with the StructureMap.WebApi2 package, you might want to read that post first, then come back here. It's OK, I'll wait.

Once we've downloaded and installed the StructureMap.WebApi2 package, we'll need to change just a couple of things. In our Global.asax file, we need to start the StructureMap container:

We also need to register the appropriate items with the container so that they can be injected. Among those items are the Repositories we created in the previous part of this series; we must register them so our API controller have them injected.

In all, our DefaultRegistry class for the Queries API looks like this:

See, that wasn't too bad! Just wait until you see the Commands API's registry.

Anyway, with StructureMap now in place, we can start building the queries we need to support. Here's the queries list we talked about in Part 3:

Let's start with the easy one: getting an Employee by their ID.

Get Employee by ID

We need an EmployeeController, with a private IEmployeeRepository, to execute this query. The complete controller is as follows:

Well, that looks pretty simple. How about the GetAll() query?

Let's see what the Location queries are:

Yep, definitely a theme going on. All this setup has made implementing our controllers very simple, and simplicity is definitely better when dealing with complex patterns like CQRS and ES.

We'll run queries against this API in Part 5, but for now let's turn our attention to the Commands API, which may prove to be a bit more difficult to write.

As I mentioned early on in this post, the Commands API is considerably more complex than the Queries API; this is largely due to the number of things we need to inject into our container, as well as the Commands API being responsible for validating the requests that come in to the system. We're going to tackle each of these problems.

First, let's deal with Dependency Injection. We'll use the same package as before, with the same Global.asax change. However, our DefaultRegistry looks much different.

In the Commands API, we need the following services available for injection:

That results in this monstrosity of a registry:

Holy crap that's a lot of things that need to be injected. But, as we will see, each of these things is actually necessary and provides a lot of value to our application.

(Hold on a second while I smack myself. I sounded way too much like a marketer just now.)

I've been using the term "request" liberally throughout this series, and now it's time to truly define what a request is.

In this system, a request is a potential command. That's all. Consuming applications which would like commands issued must submit a request first; that request will be validated and, if found to be valid, mapped to the corresponding command.

A request is, therefore, a C# class which contains the data needed to issue a particular command.

Let's begin to define our requests by first creating a request for creating a new employee.

WTF Matthew, you say, that looks almost EXACTLY like the CreateEmployeeCommand! Why can't we just use that?! And after I'm done looking around for my parents (nobody calls me Matthew), I can tell you that there are two reasons why we don't reuse the command objects as requests.

First, requests must be validated against the Read Model, whereas commands are assumed to be valid. Second a single request may kick off more than one command, as is the case with this request.

But how do we accomplish that validation, you say? By using one of my favorite NuGet packages of all time: FluentValidation.

FluentValidation is a NuGet package which allows us to validate objects and places any validation errors found into the Controller's ModelState. But (unlike StackExchange.Redis) it doesn't come ready for use in a Dependency Injection environment, so we must do some setup.

First, we need a factory which will create the validator objects:

Next, in our WebApiConfig.cs file, we need to enable FluentValidation's validator provider using our factory:

Finally, we need to register the validator provider in our StructureMap container, which is done in the DefaultRegistry class.

With all of that in place, we're ready to begin building our validators!

Here's the validation rules we need to implement when creating an employee:

Here's how we would implement such a validator using FluentValidation:

Notice that IEmployeeRepository and ILocationRepository are constructor parameters to the validator class. We don't need to do anything else to get those objects injected, as that was taken care of by registering the Repositories and the FluentValidation factory.

There's just one last thing we need to do to have our validation layer fully integrated: whenever validation fails, we need to automatically return HTTP 400 Bad Request. We accomplish this by using an ActionFilter...

...and registering that action filter in WebApiConfig.

The controller action for creating an employee does two things: it issues the CreateEmployeeCommand, and then issues an AssignEmployeeToLocationCommand. Since this is the only action in the EmployeeController class, the entire class looks like this:

Since we've now got the EmployeeController written, we can move on to the next request: creating a new location.

Now let's build a request and a validator to create a location. Our validation rules for creating a new location look like this:

Implementing those rules results in the following classes:

Looking at this controller, you might be wondering why IEmployeeRepository and ILocationRepository are passed into the constructor when they aren't used by the Create() action. That's because we still have one request left to build: assigning an employee to a location.

Remember that one of our business rules (from Part 2) says the following:

The request we are going to build now will assign an employee to a new location, as well as remove that employee from the location s/he is currently assigned to.

But, you declare, we defined a command to remove an employee from a location! Is that not also a request? Nope, it's not, and for the same reason that creating an employee results in two commands: one request can result in multiple commands. In this case, assigning an employee to a location could result in one or two commands, depending on if the employee was just created or not.

First, let's build the request and its validator. In this case, we have three validation rules:

Implementing those rules result in the following classes:

Now, all we have to do is write the controller action:

Whew! With that final controller action in place, we have completed building our APIs! Give yourselves a pat on the back for coming this far!

In this part of our Real-World CQRS/ES with ASP.NET and Redis series, we:

Congratulations! We've completed the build of our real-world CQRS/ES system! All that's left to do is run a few commands and queries to show how the system works, and we will do that in the final part of this series. Keep your eyes (and feed readers) open for Part 5 of Real-World CQRS/ES with ASP.NET and Redis!