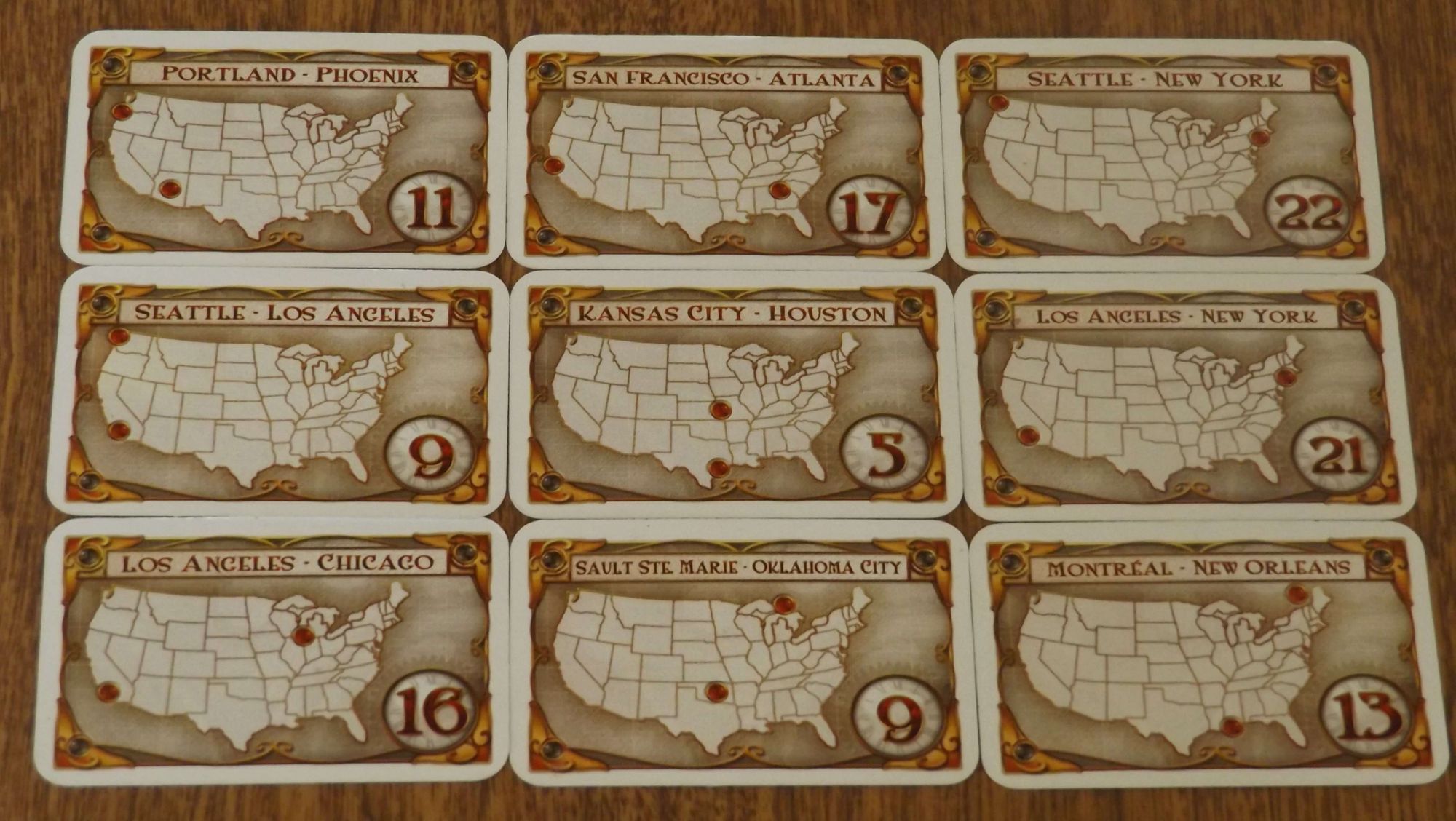 Modeling Ticket to Ride in C# Part 2: Classes and Board Setup

Now that we know how to play a game of Ticket to Ride, it's time to see if we can create the models and C# classes we need to play a game.

As always, there is a sample project on GitHub that has the code we will use here. Check it out!

Let's start our C# modeling practice by looking at the game board itself. We want to find the elements of the board that we can model using C# classes, enumerations, or other objects.

The board itself contains a collection of Cities, which are connected by Routes. The Cities do not appear to have any other information about them included in the board. In our demo, we will make the Cities an enumeration, with the following values:

We must also consider two kinds of colors: train colors and player colors.

Each route on the board has a color, and each train card also has a color. Because these colors do not have any further properties, we can use another enumeration to represent train color:

Further, each player must have a distinct color which represents them, and we can use another enumeration for this value:

As a reminder, the destination cards look like this:

We need a class to represent these cards. Each card has an origin, a destination, and a point value. Here's that class:

We also need a very simple class for a train card:

With classes for destination cards and train cards created, we must now determine how to model the routes between the cities. Here's the board again:

Note that each route has both an origin and a destination, and both of these must be cities. Further, each route has a color (which might be grey), and a length (or number of trains necessary to claim that route). Each route also has a point value, which can be calculated from the route length.

The constructor method in this class will come in very handy in a short while.

In this simulation, we will need to be operating against a collection of routes much of the time. For example, we might need to find the ideal route between two distant cities so that a player can try to claim those routes, or we might need to determine if two cities are already connected so a player can decide if s/he has completed a destination card. To facilitate this, I chose to make a new class which will represent the collection of board routes as a whole:

This class will become important in the next part of this series, where we try to find ideal routes between two distant cities.

We know we need the collection of board routes. The game requires a deck of train cards that can be drawn from, and a deck of destination cards, so we can include those in the Board object. We also need a "discard pile" for train cards that have been used to claim route and will eventually be shuffled back into the draw pile. Finally, we can include the "shown" cards, which are the face-up cards that players may choose to take during their turn.

All of this results in the following class:

The constructor for this class is what will create a new board that players can use to play a game. To create this board, we need to define three things: the board routes, the destination cards, and the train card deck.

There are a total of 102 possible routes on this board, ranging in size from 1 to 6 train cars, using various colors. A snippet of this method is here:

This method defines all 102 routes that can be claimed by the players. Note that the board routes are defined in a specific order: roughly west-to-east, then north-to-south. This is because that's how they might be read by a real player on a real board.

However, we also have a slight problem. We cannot just deal the cards to the players in the order they were created, because that would result in the players always getting the same destination cards, which is no fun.

So instead we will implement a shuffling algorithm, specifically the Fisher-Yates Shuffling Algorithm, to randomize the order of the cards (I made this an extension method):

Which we then use to shuffle the destination cards:

Similarly to the destination cards, we also need a deck of train cards that the players can draw from and the "shown" cards can be sourced from. The deck consists of 12 of each color card, and 14 locomotive cards.

First, let's create a method to create a number of cards in a single color:

We also need another extension method to shuffle these cards (again using Fisher-Yates):

Next, we can use that method to create all the cards the deck needs:

We now have our draw deck created, and by extension, the board object. Our game is ALMOST ready to play!

One Other Little Extension

There's one last little thing we need to make. For better or for worse, we are largely going to be dealing with List<T> objects in this implementation. Yes, I know it would be more appropriate to use a Stack<T> or Queue<T> instead, but I didn't. So, we need a method that will "pop" cards off a collection.

Here is that method, implemented for the List<TrainCard> class:

In the next part of this series, we will start examining one of the most difficult problems we will face in this series: determining the ideal route between two distant cities. 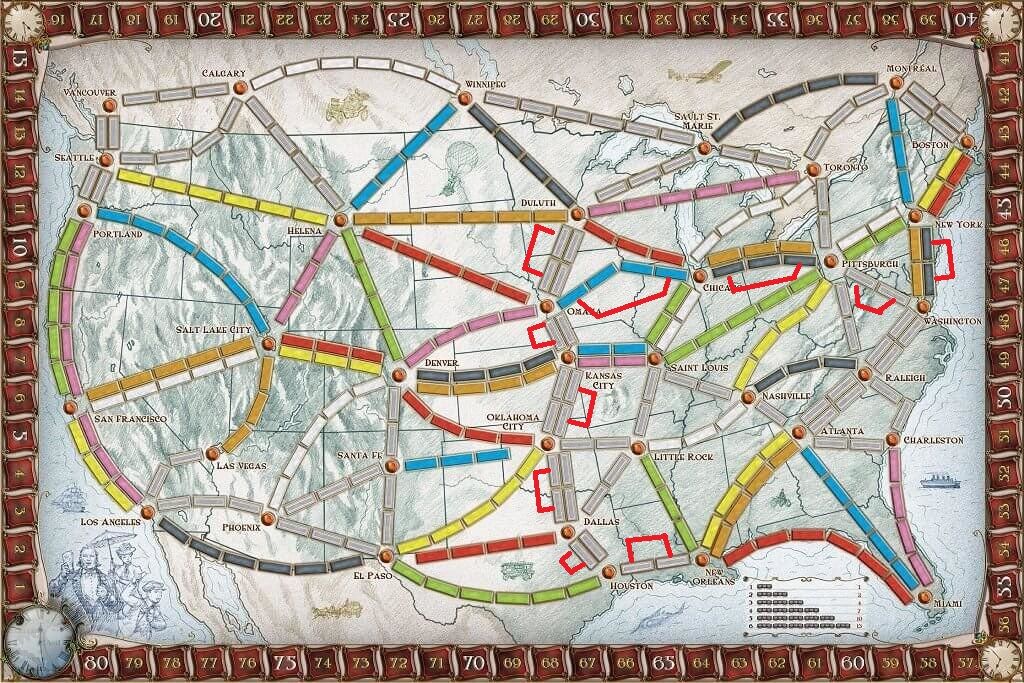 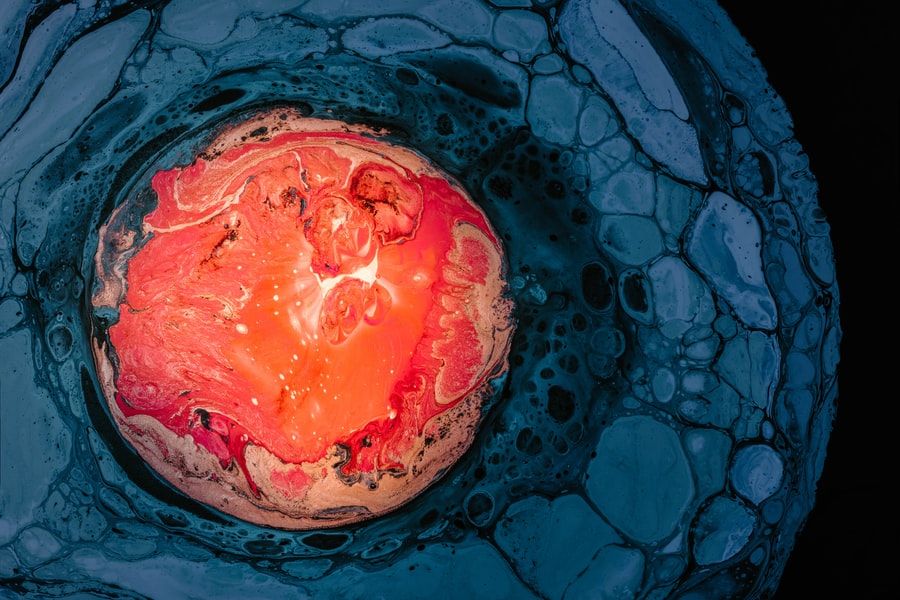